Decathlon (technically, the Decathlon Group) is a world-wide chain of sporting-goods stores. It is, in fact, the largest sporting goods retailer in the world. It was founded in France in 1976. In the mid-1980s it started to expand into other European countries. In 2003 it started to expand into China, India, and Southeast Asia. Today, it has more than 1,100 stores (many of which are large superstores that stock a wide range of sporting goods) in 38 countries. There are about 40 stores in the UK, and one in Mexico. For petanque players, the interesting thing about Decathlon stores is that they stock petanque boules and other petanque equipment.

Decathlon has multiple research and development facilities in France dedicated to developing new designs for sporting equipment, and, since 1986, it designs and manufactures its own lines of sporting goods. There are now over 20 “Passion” brands, each dedicated to a single sport (or to one type of sport) for 70 different sports. The “Passion Geologic” brand, or simply Geologic, was created in 2008. It is dedicated to “target sports” such as darts, archery, pool, and petanque.

Early in 2018, Decathlon opened its first store in the United States, in San Francisco, California. The business plan is to open stores in other states in the USA, and then (in a year or two?) to expand into Canada. Their website says that their goal is to make every Decathlon product available throughout the USA.

The San Francisco Decathlon store is located at 735 Market Street, San Francisco 94103 (between 3rd and 4th)— close to the Powell BART Station. The store’s web page is HERE.

Geologic boules offer reasonable quality at a very reasonable price. Decathlon can do this by offering a very limited range of only the most popular patterns, weights, and sizes. Geologic offers three general types of boules: really cheap low-end leisure boules, a “Discovery 300” line of leisure boules, and competition boules.

LOW-END LEISURE BOULES
Verdict: Do not buy. Too big for kids and too light-weight for adults.
Geologic’s entry-level line of leisure boules seems to me to be seriously misguided. They are 70mm in diameter and weigh 560g. This makes them too light-weight to be acceptable for adult players, and too large for younger kids (junior competition boules are typically 65mm). A set of eight boules (4 pairs of 2 boules each; a stupid configuration) costs around $26.

“Discovery 300” HIGH-END LEISURE BOULES
Verdict: Cheaper than Obut’s comparable leisure boules, but for $10 more you can get a set of Alpha competition boules.
“Discovery 300” is a line of moderately-priced ($41) hollow chrome-plated carbon-steel leisure boules. They are 73mm in diameter and weigh 660g, which is the same size and weight as Obut’s new line of stainless steel leisure boules. They cost twice as much as Chinese-made leisure boules, but less than Obut’s leisure boules. Three designs are available: “baseball”, “classic” (single groove), and “jester”. I can’t speak to their quality or durability. Their price seems to me to be high when you realize that for only a few dollars more you can buy a set of Alpha competition boules.

COMPETITION BOULES
Verdict: Alpha is is an excellent, low-cost choice for your first set of competition boules… if the size and weight is right for you.
Geologic offers four models of FIPJP-certified competition boules. They are named after the Greek letters Alpha, Delta, Pi, and Upsilon. The purpose of having four models is to be able to offer carbon and stainless steel boules in harder and softer models. (You can read more about the hardness of boules HERE.) The Alphas that I purchased in September 2018 were manufactured in Taiwan. The size and the weight are engraved on the boules like this— “690-72”.

THE BOTTOM LINE
Alpha is is an excellent, low-cost choice for a first set of competition boules. Alpha’s size/weight/striation options are limited but adequate for beginning and moderately-experienced players. Those with specific size/weight/striation preferences will need to look elsewhere. 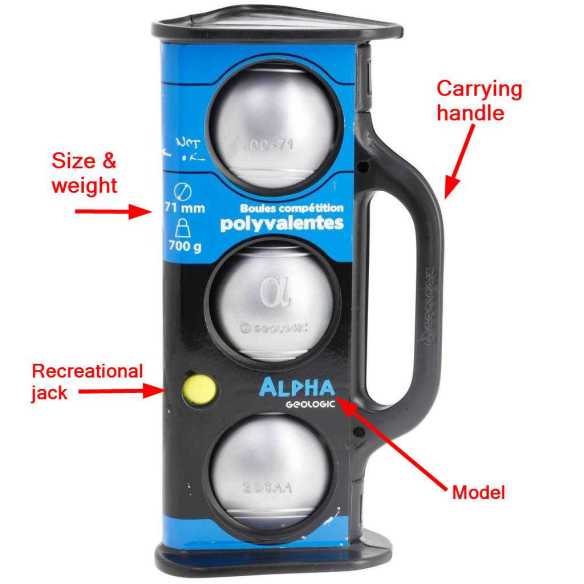 Will this affect Petanque America?

Having studied the Geologic lineup, I’m pretty sure that Petanque America (whose bread-and-butter is leisure boules) will continue to dominate the market for leisure boules.  Geologic’s low-end leisure boules are laughable. Discovery 300 leisure boules cost twice as much as Chinese leisure boules and I have no evidence that they are significantly better in any way.

When it comes to competition boules, the situation is less clear. Alpha is the cheapest competition boule on the market and we can expect that its price will make it attractive to beginning players. Alpha’s size/weight/striation options are limited, so players, as they improve, will probably look elsewhere for their second set of competition boules. But the number of American players who own two or more sets of competition boules must be a very small niche market. There’s probably not much money to be made there.

[added 2018-09-03]
Review of Geologic recreational jacks
Geologic sells two models of jacks: recreational jacks, and wooden competition jacks. Customer reviews of the recreational jacks on the Decathlon site are overwhelmingly positive, with players praising the jacks’ durability, visibility, and affordability ($3.50 for a pack of 3).

The recreational jacks are designed for recreational use (like leisure boules) and are not authorized for use in FIPJP-sanctioned competitions. They are made of solid plastic which is reported to be very durable; paint will chip off of wooden jacks, but that won’t happen with these jacks. One of the strong points of these jacks is that their bright fluorescent yellow color makes them easy to see in poor lighting conditions, in twilight and at dusk.

The jacks are 29mm in diameter, which puts them on the small end of the range of legal sizes (30mm +/- 1mm). They weigh 11g, which puts them on the light end of the range of legal weights (10g-18g). Partly because they are so light, and partly because they are made of plastic, they are very lively; if you hit one of these jacks it is going to fly farther and faster than a wooden jack. My advice to Decathlon would be to make these jacks slightly larger and heavier and get them certified as competition jacks by the FIPJP— I think they’d have a real winner.
For more information about the rules governing jacks, including some of the issues surrounding synthetic jacks, see THIS. 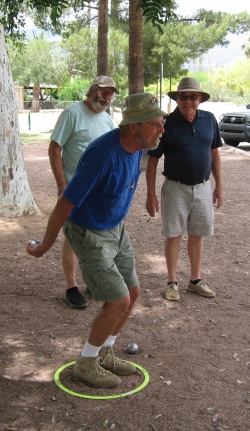 As of May 4, 2019 the Tucson Petanque Club has been playing with the Geologic petanque throwing circles for a couple of weeks. We are happy with them.

The Geologic circles are not as wide as the red circles made by FBT (the Thai manufacturer of La Franc boules). They are about 1/8″ narrower, so their outside diameter is a bit smaller, they weigh a little less, and they are more flexible. But they work just fine.