See also How to throw a boule. 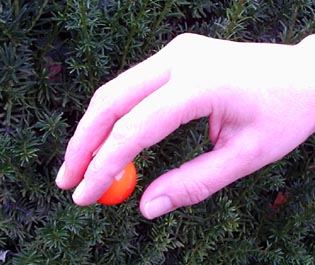 Another way, which is shown on a German-language YouTube video, is to hold it between your thumb and middle finger and then flick or snap it.

A similar style is used by players from Madagascar. This technique, if you can get good at it, seems to provide a remarkable degree of precision. Thierry Bezandry demonstrates the technique in these photos from the educanaute-infos web site. This technique may put backspin on the jack, minimizing roll-out after the jack hits the ground. 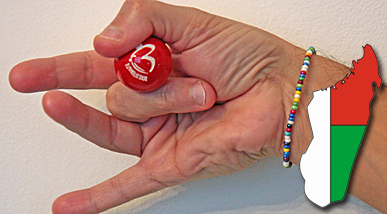 A jack doesn’t weigh very much, so if there is a breeze when you throw it, it may not go very far. On the other hand, because it is so light, it may land and then skitter along the ground for quite a distance. So it takes practice to be able to make the jack go where you want it to go.

And where do you want it to go?

Most club-level shooters are good but not (yet) great. They can be comfortable and accurate at a distance of 8 meters, but less so at longer or shorter distances. So you have a number of options for throwing the jack. One is to try to throw the jack as long as possible, to make it as difficult as possible for the opposing team’s shooter (and pointer). Another is to try to place the jack at whatever distance is most comfortable for your own team’s shooter. Still another (if you’ve played the last few menes at very long distances) is deliberately to throw a very short jack— barely over six meters. Sometimes the opposing shooter will have difficulty in adjusting to the change in range.

For some teams, the shooter likes to throw the jack himself and then turn the circle over to the pointer to point the first boule. But in most cases the pointer only needs to talk with the shooter before the game starts, in order to plan a general strategy for placing the jack.

As a beginning player, your success in throwing the jack will be hit-and-miss. But it is important to have a specific goal and plan in mind when you throw the jack. You’re not just randomly tossing it somewhere “out there”.