In team play, the standard practice is for the team’s pointer to throw first and for the team’s shooter to throw last. Teams like to hold back their shooters — to keep them in reserve, so they will be available in case of an emergency.

This strategy works well, but it can be frustrating for pointers.

A few years ago we were playing a visiting team that had an exceptionally strong shooter. This gentleman, whose name was Van, had been a championship-level shooter as a young man in Vietnam.

I was pointing well. But no matter how well I pointed, Van would play next and shoot away my beautifully pointed boule. Finally, I expressed my frustration to a friend.

“Don’t feel bad,” he said. “The fact that Van is always being called in to shoot your boules means that you’re doing your job.”

“Your job as a pointer is to point so well that you force the opposing shooter to shoot you. Basically, your job is to disarm the opposing team of its shooter. By pointing well, you’re doing just what you’re supposed to be doing.”

Here is a great post from the Harrogate Montpellier Petanque Club. I’ve lightly edited it for American readers.

First boule of the end 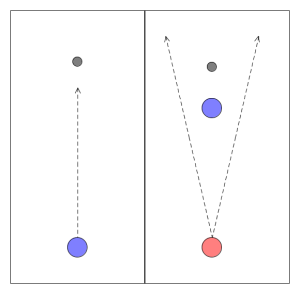 Always try to put your first boule in front of the jack. About 30-50 cm is a good distance, but even a meter in front is better than 10cm behind (see Backstops below).  The French have a saying, “Une boule devant, c’est une boule d’argent” – A boule in front, that’s a money boule.

The ‘boule devant’ has two advantages:

A boule just behind the jack is a gift to the pointer.

Of course, there’s nothing to stop the opposition from now using your boule as a backstop — but that’s all part of the game. 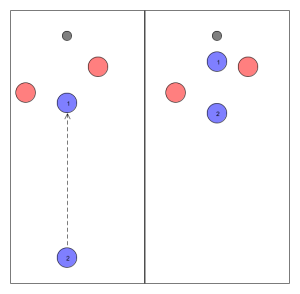 As mentioned above, boules in front of the jack can be promoted by running your boule into them and knocking them forward.  [Americans usually call this “pushing” your own boule.] There’s often an additional benefit in that the second ball remains close to the point of impact, forming a blocker.

Be careful if there’s an opposition boule close to the one you wish to promote. You can push an opponent’s boule as easily as one of your own, so take into account how accurately you can throw.

A common scenario for beginners starts when the opposition get a boule very close to the jack early in the end.  You can’t really point closer so you try to shoot it away.  Your team’s throws keep getting closer and you’re sure the next one will do it but you suddenly realize that your team have used up all of your boules!  Your missed shots have probably all gone sailing off well past the jack, allowing the opposition to rack up a big score with their remaining boules.

To reduce the odds of getting thrashed like this, you need to point one or two boules that, although not closest to the jack, are close enough to make it difficult for the opposition to score lots of points.  Better for them to score a couple of points than five or six.

Ideally, try to make your boule snuggle up to the opposition’s closest boule so that they’ll think twice about trying to shoot yours away.

When limiting the damage won’t work

Of course in a situation where the opposition team needs only a single point to win the game, limiting the damage to only one point won’t help.  Strategies to consider in this situation are:

None of these strategies are an easy option but you don’t have a lot of choice.

Here is one useful tip for effective pointing.

When you point, there are three spots that are important.

The first rule of effective pointing is “Don’t aim for the jack”. Instead —

And then aim for the donnée.

This is one of the first things that any experience pointer will teach a new player. Here, for instance, is Marco Foyot.

After picking the parking spot, pick the landing spot.

Throw your boule to the landing spot – the donnée

… and let it roll to the parking spot.

You can watch Marco giving the pointing lesson on YouTube. 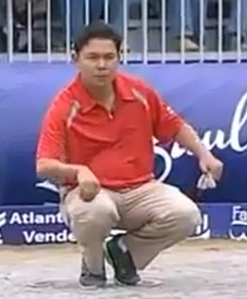 I first saw this clip a few weeks ago, and haven’t been able to get it out of my mind. I found it very thought-provoking and just a little bit shocking. It is 8 minutes long, but it is important to watch every second to understand exactly what you are seeing.

I was reminded of it again yesterday when I discovered Colin Stewart’s petanque blog and read his post on Shooting is Fundamental in which he writes “All too often we see players elect to point (because they think it is easier or safer to) when a shoot would make things a lot better.”

And I keep wondering what the Thai team should have done. Thailand never changed its strategy. Every time Madagascar shot the Thai boule, and every time Thailand chose to point again.

The Thai team is an excellent team. They can shoot too. Surely, I think, there must have been something that the Thais could have done to turn the tables on Madagascar’s shooters. But I don’t know what it could have been.

The FIPJP precision shooting (tir de precision) competition is a combined event (like a decathlon) with five different individual events (ateliers). In each atelier the competitor throws four boules (one from each of four distances— 6, 7, 8, and 9 meters) at a target positioned in a 1-meter target circle (cible).

Some informational graphics about the competition

The basic rules. Click HERE to see the full-sized image.

Some pictures of competitions 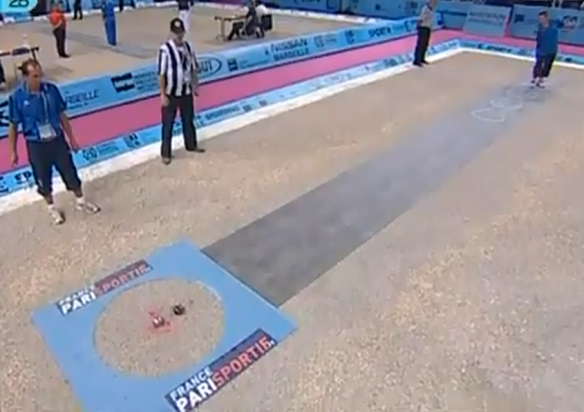 A youth competition in 2011.
Click HERE to see the full-sized image.

At Mâcon in 2011 the contestants get the red carpet treatment. An official uses a frame to position the target boules and jack in the desired configuration.