Features to consider when choosing boules ▲

Considerations related to the boule’s physical composition include:

Other things to consider include:

When you go to an online web site and look at different models of boules, each model represents a combination of (material + hardness + finish). Once you’ve picked out a model, you will be asked to choose a size, a weight, and a striation pattern.

For a bit more about brand names, see our brief overview of boules manufacturers.

There is a traditional school of thought that says that you should choose your boules based on the role you play in a triplets team — a pointer should use a small, heavy boule with striations, a shooter should use a large, light, smooth boule, and so on. In our opinion, the whole idea of role-based recommendations is BS dubious, and certainly useless for beginning and mid-level players. To read more about it, see our post on player role and boule selection.

It is only common sense that there must be some approximate relationship between the size of a person’s hand and the size of a boule that will fit comfortably into that hand. A person with small hands will probably prefer a small boule; a person with middle-sized hands… etc. etc.

A number of methods have been devised for picking a boule-size based on a person’s hand-size. We discuss these methods in another post. But shopping for boules is like shopping for shoes — the best way to do it is to go around trying on things until you find the size that fits you. If you have friends who own competition boules, ask your friends if you can try out, or at least hold, their boules to see if you can find a size that feels comfortable. At first, all sizes will feel the same — don’t worry, that’s normal.

We advise beginning players— even the biggest of men with the biggest of hands— to start with a boule no larger than 74 mm. For most people (and especially women, who tend to have smaller hands) the best choice is a smaller boule (73, 72, or 71 mm). If in doubt, we recommend going smaller rather than larger. If you find that (when playing a lot) your forearm gets tired and sore, you probably should try a smaller boule, or a different grip. (Read our posts Are Your Boules Too Big? and Two ways to hold a boule.)

Many serious women players like the smallest legal size of competition boules— 70.5mm. It is available in Obut’s Match IT and Match TR lines, but not, unfortunately, in Obut’s least-expensive line, Match. 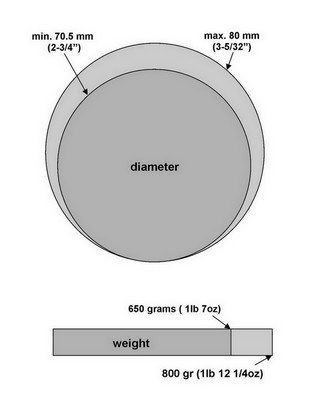 Weight, like size, is often simply a matter of personal preference. Most players prefer boules that weigh between 680 and 720 grams. Slight differences of weight that would be important to advanced players are not important to the beginning player, so for your first set of competition boules, we suggest that you choose a set that weighs 680 grams, and then don’t think about it again for at least a year.

If you find that you are using all of your strength to muscle your way through the throw, you probably don’t need a lighter boule (and a lighter boule wouldn’t help). More likely, you need to work on your form. Learn how you can use the weight of the boule rather than fighting it. If you find that your hand and wrist get sore from gripping and holding on to the boule, you may need a smaller boule rather than a lighter one.

For your first set of competition boules, we recommend harder boules. Harder boules tend to be cheaper than softer boules, and they are less likely to develop gouges and burrs if you play on surfaces with hard, sharp rocks. Until you become very skillful, the hardness of your boules is going to make no real difference in how well you play.

For advanced players, soft or semi-soft boules may be a bit easier to control — although we DON’T buy into that old wives tale about softer boules being more likely to produce carreaux. For more information, see our page on Selecting competition boules – hardness.

Choose whatever striations, or no striations at all, appeal to you. The more unique the shape of the striations, the easier it will be to identify your own boules. Putting a little magic marker, acrylic paint, or fingernail polish in the striations can make them even more distinctive.

Paint doesn’t stick to chrome, so for chromed boules we recommend using a broad-tipped permanent marker in the grooves. Magic marker will slowly wear off, but it is cheap and easy to re-apply. For more information, see our page on Selecting competition boules – striations

Today, virtually all boules are made of steel (acier) — either stainless steel (inox) or carbon steel (carbon).

The advantage of stainless steel boules is that they will not rust. Carbon steel boules (unless the humidity is very high, e.g. at the seashore) will be polished by the terrain and will remain rust-free as long as they are used regularly. If left to sit in humid conditions, a carbon steel boule may develop a coat of rust. If you stop playing for a while, you can keep your carbon-steel boules from rusting by storing them with some dry rice, dusting them with talcum powder, or giving them a light coating of oil or WD-40. If they do rust, or if you find an old rusty set, a steel brush and then a few days of play will remove the rust and leave the boules with a darkened color and a slightly rough surface that gives a good grip.

Most boules are a dull grey or silver color. Some have a “satin” (very bright shiny, glossy) finish like the chrome trim on your automobile, or a more subdued “matte” or “brushed steel” finish.

Most Chinese-made leisure boules have a high-gloss chrome layer that is attached to the steel boule by a thin layer of copper and nickel. The chrome layer is tough, but after MUCH play it may start to wear off. This exposes the copper layer and the boules will start to turn red-orange. If you see a set of copper-colored leisure boules, you know they have been well-used over many years.

See also our post What is a boule made of?