Tucson’s climate is warm and dry (like the South of France) and there are many places in public parks that make fine petanque terrains. We don’t need a dedicated petanque boulodrome (although an air-conditioned one in summer would be nice). We prefer to play in the park on an open terrain.

There is, however, one problem with this arrangement. We can’t play after dark because none of the places where we play during the day has lights for night play.

There is a solution to this problem. I’m blogging about it because the solution is probably available in other cities, too.

In Tucson, the city and the county have a variety of public recreational facilities— parks, swimming pools, and community centers. There are also several large sports complexes scattered around the city. These facilities are designed to support sports that require large playing fields— baseball, (American) football, and soccer.

In these sports complexes, the baseball fields are typically pie-shaped. They are laid out in a large circular area that is divided into four quarters by wide gravel paths. There is one baseball diamond in each quarter. The paths between the fields give players and spectators access to the fields and to viewing stands. Tall posts supporting floodlights are located on the paths— the floodlights are very bright, and illuminate the fields on both sides of the paths as well as the paths themselves.

The paths are very wide. Because people walk across them a lot, they are hard-packed. They make perfect petanque terrains. 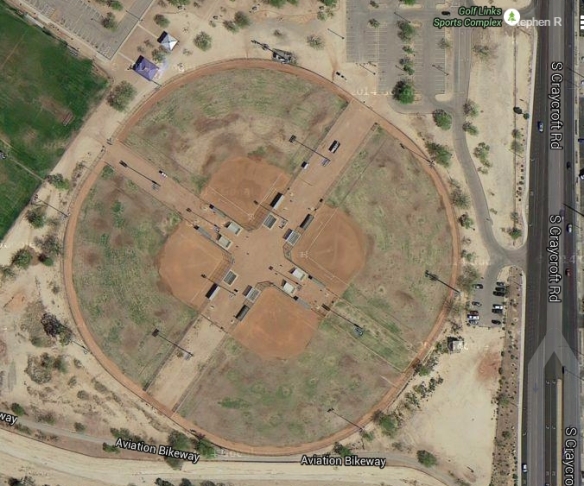 Aerial view (courtesy of Google Maps) of a typical sports complex— the Golf Links Sports Complex— in Tucson, Arizona, USA. The main entrance is from the parking lot in the upper right-hand corner of the photo.

Monday through Thursday evenings, city-league softball games are played on the fields. Games are scheduled for three time slots beginning at 6:30, 7:35pm, and 8:45pm. While games are in progress (roughly between 6:30pm and 10:00pm) the fields and paths are brightly lit by the floodlights located on the paths.

Between games players arrive and leave before and after their games, and there is a lot of foot traffic on the paths. But once the softball games have begun, the paths are virtually empty. The empty paths make excellent lighted petanque terrains.

View from the main entrance of the Golf Links Sports Complex in Tucson, Arizona. The access path for the baseball diamonds makes a perfect lighted terrain for night play.

In petanque, the word carreau refers to the perfect shot, when the thrown boule makes a direct hit on the target boule, knocking the target boule away and exactly taking its place.

Carreau can also refer to the diamonds in a deck of cards. Hence the name of the famous bronze boule from La Boule Intégrale, the AC (as de carreau, ace of diamonds). 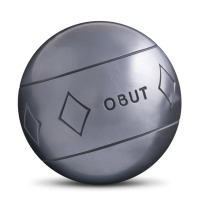 Hence also the name of one of the designs in Obut’s old Tatou line of leisure boules— the “Card Carreau”.

What’s the connection between a floor tile and a petanque carreau ? You can find the answer in the collection of Petanque Terminology assembled by Jeff Widen.

The origin of the term is thought to have come from the fighting expression “rester carreau” – “to remain on the spot, to be laid out cold.” “Le carreau” means the “floor” (usually only applied to one that is either tiled or paved).

So when you rester carreau (“stay on the floor”) you drop to the floor like a rock and you stay there. Which is what a thrown petanque boule does when it makes a carreau.