This American umpire’s scorekeeper for baseball (below) was manufactured in the 1870’s. At that time, the rules of baseball allowed nine balls and nine strikes, so the numbers on the two wheels go up to 9, and the wheels are labelled “balls” and “strikes”

The same two-wheel design is used in traditional petanque scorekeepers like this one from the French manufacturer Obut. The front plate identifies the two wheels as the scores for Nous and Eux — “us” and “them”. Numbers go from zero to 15 because international championships used to be played to 15.

The problem with this scorekeeper is that it is poorly made. The colored face is thin paper glued to the leather body— it quickly begins to peel away. The tightness of the screws is difficult to adjust, and if you drive around with the scorekeeper in your car, road vibrations will cause the screws to work loose and fall out.

Perhaps in response to these problems, around 2019 Obut abandoned this design and began selling a similar pocket scorekeeper made out of plastic. The new plastic ones seem to work much better than the old paper-and-leather ones. You can buy one of these from Petanque America. 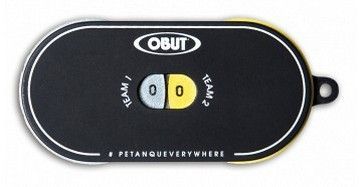 Lately [updated 2021-01-10] Decathlon (under its Koodza label) has been offering something similar, but different. CLICK to visit the Decathlon UK website. 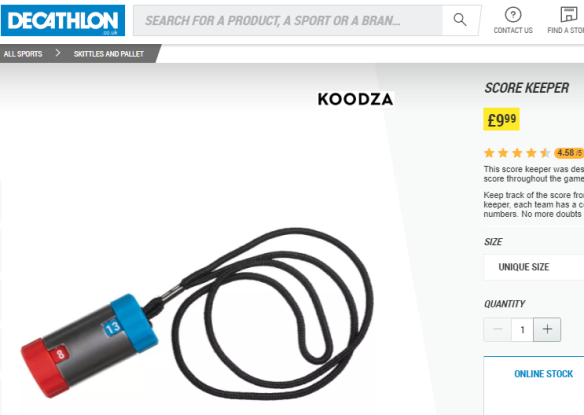 I’m diabetic, and I use disposable insulin pens. To use an insulin pen, you twist the end of the pen— click, click, click— and dial in the number of units of insulin that you want to inject. When the pen is empty, you throw it away. I took three of these discarded pens, cut off the ends with the twist counter, and glued them together to make a pocket scorekeeper. The three-counter design is useful in cut-throat games, where you need to keep track of three players’ scores and games may be played to 21 or even 35 points. 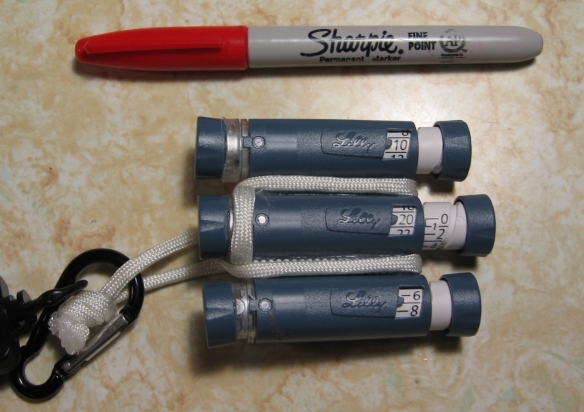 In 2006, Jill Barnes of Dublin, California (just east of San Francisco) was frustrated during her son’s baseball games. Either there wasn’t a scoreboard or the scoreboard wasn’t functioning. So she came up with a design for a simple universal pocket scorekeeper. It has a set of wheels for “us” and “them” (well, “me” and “you”). Its four independent numbered wheels can record scores of up to 99 for virtually any sport. It is available from Jill’s web site, www.pocketscorekeeper.com. Personally, I liked the rugged plastic construction and the straightforward simplicity of the design, but I found the wheels to be stiff and difficult to advance. I needed to use both hands to change the score. 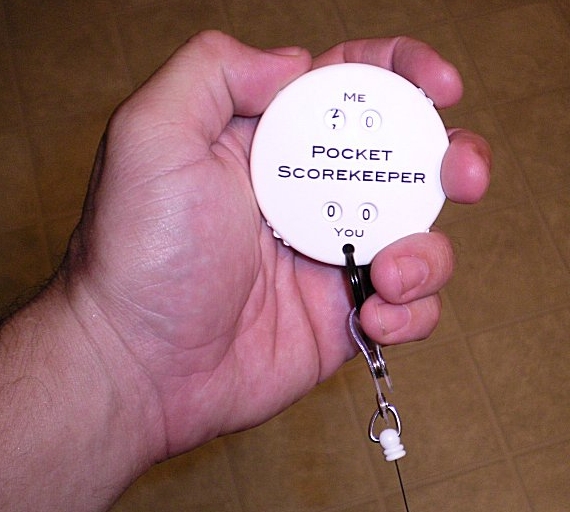 For Android, Pétanque: Marque Scores looks promising. It has a lot more features than just the basic ones I mentioned. Not surprisingly, it looks like it is the creation of a French software developer. 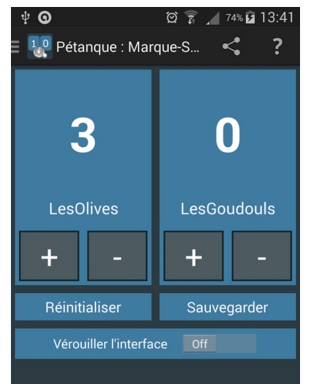 As pf 2016, when this post was originally written, Apple’s app store didn’t seem to have any good petanque scorekeeper apps. Two general-purpose scorekeeper apps that had good reviews were Swipe Scoreboard and Score Keeper HD Lite.