Recently a friend asked for suggestions for learning to shoot. Here are some thoughts, based on my own experience.

Personally, I find it helpful to practice shooting with three different goals in mind. I devote one part of my practice session to one of the goals, another part to another of the goals, and so on. My three goals are form, consistency, and accuracy.

When I first started practicing form and accuracy, I noticed that even though my form wasn’t too bad, my throws were wildly inconsistent. Some were low; some were high; some were short; some were long. I saw that I needed a third goal— consistency. Instead of thinking of consistency as hitting the target (accuracy), I began to think of it as a matter of control— of consistency in the speed of my throw, and consistency in when I opened my hand to release the boule.

1. Form
On the grounds that no one will ever be able to throw well if his/her form is bad, my first goal is to get my form right. That means doing two things.

A good way to learn what good form is— how experts move their bodies while they shoot— is to watch Youtube videos of world-class shooters. Some good videos are HERE, HERE, and HERE. As you watch, ignore the game and pay attention to the shooters’ form as they throw. What are they doing with their feet? Their knees, their shoulders? Their backswing, their follow-through, their non-throwing arm? No two players have exactly the same form, but there are a number of things that most world-class shooters do. Watch for those things, and create a mental image of your ideal throwing form. Better yet, if you find certain players whose form looks good to you, watch them a lot. They will give you a concrete picture of what you want to imitate. 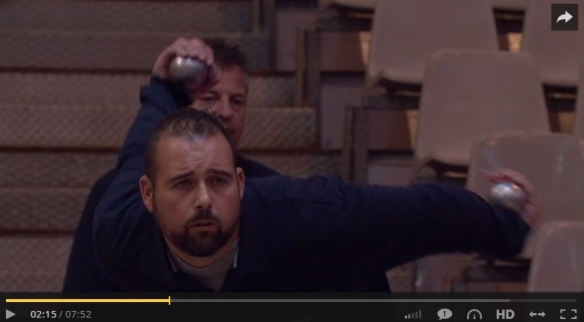 A DailyMotion video of a recent match shows an expert shooter in full backswing. Note the position of his shoulders, torso, throwing hand, and non-throwing hand. A good model to imitate.

To really learn how to imitate that form— to learn how to do with your body what you see experts doing with their bodies— you need feedback on your efforts. Ideally you’d have a coach to watch you and give you useful feedback. If you don’t have a coach, enlist a friend to watch you and provide feedback. If you have a cell phone or digital camera, set it up and make a video of yourself while you’re practicing. Then you (and a friend or coach) can watch the video and evaluate the strengths and weaknesses of your form.

When you are practicing your form, don’t worry about how close you get to the target. Hit or miss, it makes no difference. Pay attention to how you’re moving your body. That’s what it means to practice your form. 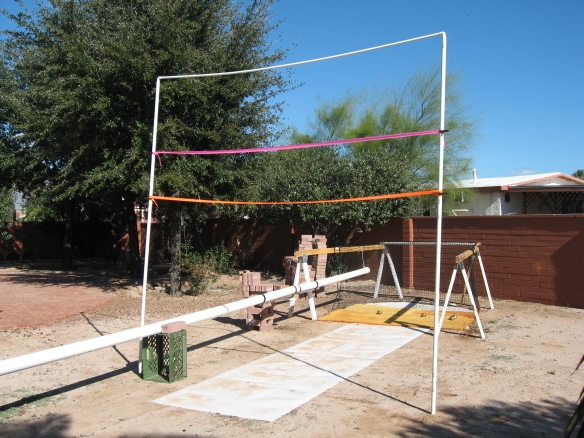 Practicing with the ribbons helps keep me aware of the height to which I am actually throwing. And it helps me to get a better idea of what is a good/desirable height for my throw.

3. Accuracy
Once your form is workable and you have enough control to throw consistently, your final goal is accuracy… putting the boule onto the ground where you want it to go (i.e. immediately in front of the target boule). The only way to learn this is to practice a lot. When you throw, pay attention to where your thrown boule lands with respect to the target boule. Assess the accuracy. Did the boule land where you wanted it to? Or was it long? short? left? right? Then throw again. Throw, watch, repeat. A lot.

Sometimes it is helpful to stand at a fixed distance and just throw and throw until you get the distance down. But don’t do that all of the time. Practice throwing in rotation. Throw a few boules from one distance, and then move to a new position and throw from a different distance. During real play you will need to shoot from a variety of distances, and practicing this way helps to prepare you to do that.

Note that practice isn’t just a matter of mental learning; it’s a matter of physical training. When you practice, you’re building the muscular strength, flexibility, and reaction-speed that you will need in order to throw a boule all of the way from the circle to the target.