Last week I tried to watch a petanque video on Youtube, but it was hopeless. You just couldn’t see the jack. It was a low-resolution video, the terrain was light-colored, and the black-colored jack was completely lost among shadows caused by irregularities in the terrain. Eventually I gave up.

Later I wondered what could have been done to make the jack more visible. Perhaps a different color. Or… perhaps… a larger jack!

There is no reason why the jack has to be the size that it is— 30mm ±1mm, as currently specified by the FIPJP rules. The size isn’t written in stone. Before 2008, the official size of the jack was 25mm to 35mm in diameter, which allowed for quite a lot of variability.

What if we played with a larger jack? For one thing, it would make televised matches easier to follow. And there would be another benefit— it would make the game easier for vision-impaired players. Last year one of our senior players began to experience the effects of age-related macular degeneration. Fortunately she was able to continue to play if we used our brightest-colored jack. But it occurs to me that we could help her even more by playing with a larger jack. Why not? 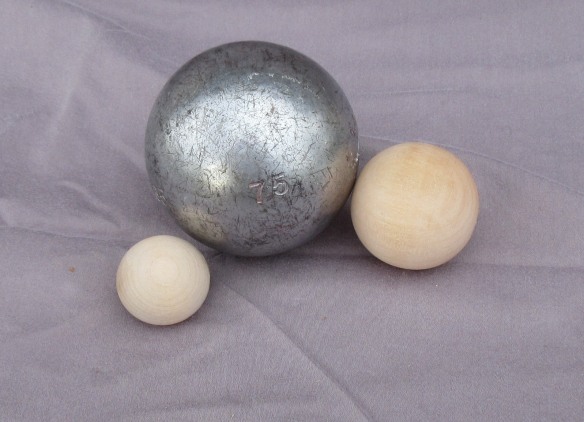 I’m not saying that the FIPJP should change its rules about the size of the jack. (Although it would be sensible to provide competition organizers with a “large jack” option for televised games or games with a large stadium audience.) But I think that for friendly games with vision-impaired players, it would be quite reasonable to consider making and using larger jacks.

1 thought on “Playing with a larger jack”