Pastis is a strong (45% alcohol) anise/licorice liqueur, somewhat similar to Greece’s ouzo and Lebanon’s arak. It is part of the traditional culture of the south of France, and especially of Marseille and pétanque.

Before World War I, a licorice liqueur called absinthe was popular in France, especially among intellectuals and artists. Rumors, however, began to circulate that wormwood, one of several herbs used in making absinthe, was hallucinogenic, toxic, or both. This of course only increased absinthe’s appeal to Parisian bohemians.

The rumors were promoted by both wine makers and prohibitionists until by 1914 most European countries (and the United States) had prohibited the production and sale of absinthe. Absinthe makers did exactly what you might expect; they reinvented themselves in the early 1930s as makers of an anise liqueur that did NOT contain wormwood— pastis. (The word “pastis” is derived from the Provençal pastisson and the Italian pasticcio, meaning a blend or mixture.) The bogus bans on absinthe were finally rescinded in the United States in 2007, and in France in 2011.

The most successful makers of pastis were two companies, Ricard and Pernod. The two companies merged in 1974 to form Pernod Ricard, although the two brands remained separate. Ricard for a long time has been well-known as a strong supporter and promoter of petanque. The most famous petanque tournament in the world, Le Mondial la Marseillaise à Pétanque was created in 1961 by a collaboration of the daily newspaper La Marseillaise and Paul Ricard, the founder of Ricard.

How to drink pastis 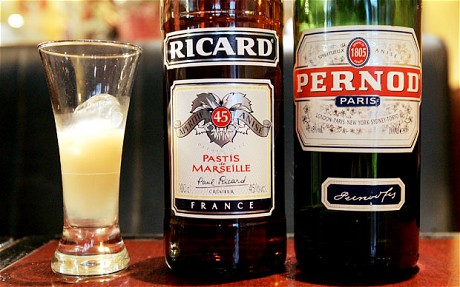 The traditional way to drink pastis is — 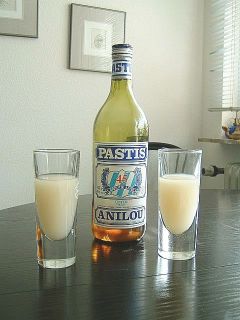 I love the change in color and the fact that you can re-dilute your pastis once you’ve drunk it down a ways, to extend it and, perhaps, sober up a bit. I also love the way pastis gives you a roaring appetite. … Try it with a bowl of tapenade, good olive oil and some rounds of crusty bread, and you’re set for the beginning of a great meal.

Pastis may also be taken by itself as an aperitif. Or you can drink it like an American— with Coca-Cola or 7-Up, or in a pastis cocktail.

2 thoughts on “Pastis, and how to drink it”