Fanny is, as it were, the patron saint (or perhaps, goddess) of petanque.

Being fanny (être fanny) means losing a game of boules or pétanque without scoring a single point— losing 13 to zero. (In the USA, we call that a “shutout” game.) Having to kiss Fanny is the ultimate humiliation for boules players everywhere. But it’s also possible to have a lot of fun with Fanny.

In one version of the legend, Fanny was a waitress at the Café de Grand-Lemps just after World War I. She was so kindhearted that she would allow customers who had lost a game of boules without scoring a single point to kiss her… on the cheek. One day the village mayor lost a game and came to collect his “prize”. No one knows what prompted Fanny… perhaps she was unhappy with the mayor for some reason. She lifted her skirt and, one might say, turned the other cheek! The mayor never hesitated, though, and less than a second later two loud kisses resounded through the café. This was the beginning of a tradition that requires a player (or team) that loses a game without scoring any points to kiss the bottom of a girl named Fanny.

The ceremonial humiliation often involves kneeling for the kiss and includes the ringing of a bell. (Note the gentleman at the right, ringing a hand bell.) 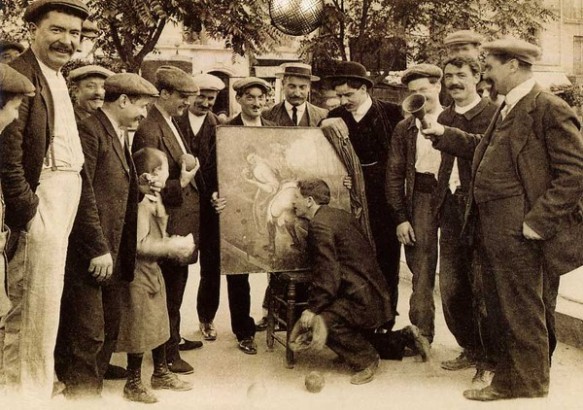 And that is why wherever boules is played in France, a painting or a poster or a sculpture of stone or pottery is proudly displayed…

…ready to be kissed, in public, by the unlucky (malheureux) losers.

Often the losers have to buy drinks for the winning team— “Fanny paie à boire” — “Fanny’s buying the drinks!”

Although Marcel Pagnol often wrote about pétanque, and the film Fanny includes a famous game, the tradition is unconnected with him.

Like many mythical heroines, Fanny’s origins are a little murky. One version has it that she was a boules groupie in Lyon – the kind of girl whom today you might see hanging around soccer players. Another is that she was a café waitress in Isère. The Provençal version, which is naturally the the one I take as gospel, is that she worked in a bar overlooking the boulodrome in La Ciotat, where pétanque was invented.

Although petanque players usually claim Fanny as an exclusively petanque icon, Fanny can be traced back at least to the mid-1800s when boule lyonnaise and other bocce-like boules variants were popular and petanque hadn’t yet been invented. One bocce web site claims that Fanny came into being in Lyon around 1860 — and has the pictures to prove it. Here is Fanny with bocce balls — or perhaps boules lyonnaises — not petanque boules.

To the unfortunate player,
as to the empty-handed hunter,
There remains a sweet hope,
when the game is over:
it is to kiss, with emotion,
the beautiful pumpkin
that is offered to the vanquished,
the plump “backside” of Fanny

Perhaps the most charming representation of Fanny that I’ve seen is a little statuette that Patrick LeThorois photographed at an antiques fair in Isle sur la Sorgue. Again, note the large boules lyonnaises near her feet. The small ball in front of her feet is the target ball, the pallino. 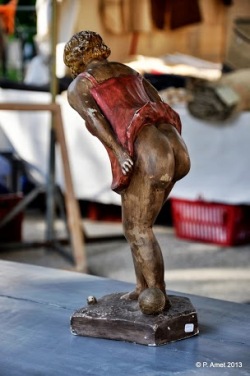 Here is a “shrine” to Fanny modeled on a traditional prayer bench (kneeler, prie dieu). Note the bell at the top.

To see more of Fanny, visit this gallery of representations of Fanny, or the Fanny page at Musée de la Boule.

2 thoughts on “Fanny – the goddess of petanque”