If you happen to find some rusty old boules, don’t write them off. They can be restored to playable condition.

I have a set of La France SB boules, which are soft carbon-steel boules. During the summer, I lost one of the boules. About 4 months later, I found it under the edge of a scrap piece of carpet in the back yard. Outdoors in our summer rains, the carpet had kept the boule covered and moist. By the time I found the boule, it was completely covered in a thick coat of orange rust.
Click to view larger image. 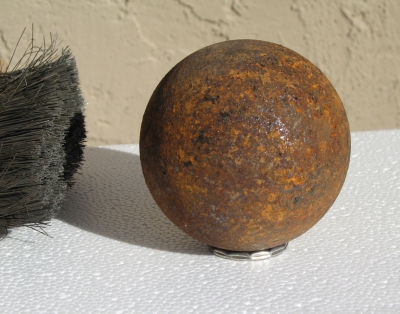 Despite appearances, this was not a disaster. A few minutes with a wire brush, and a few more minutes dragging the boule around on the ground to simulate a few days of play, and the boule was restored to playable condition. Here is a picture. The boule on the left is the rusty and restored boule. The other is another boule from the same set that was kept out of the weather and played with occasionally. The restored boule is darker in color, and has a rougher surface. Personally, I like the changes.
Click to view larger image. 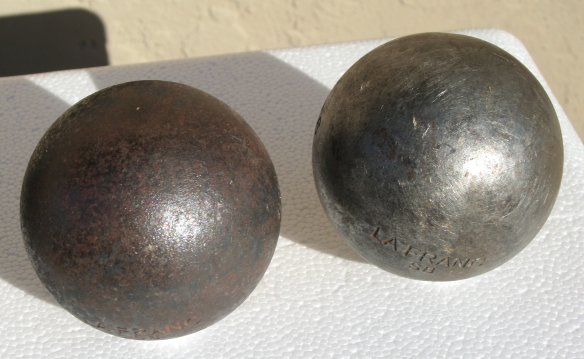 I simply used a wire brush to remove the rust, but there are other ways to deal with rust. On Youtube you can find a lot of videos that show you how remove rust from iron objects by soaking them for a few days or weeks in vinegar. An important part of the process is a post-processing soak in a solution of baking soda that will neutralized whatever acid (vinegar) might still be left.

There are also products called rust converters that don’t remove rust, but chemically convert it to a hard, black, stable material called iron tannate. Rust converters are often used to restore and preserve iron-based historical artifacts such as old swords. For more information, Google (or search amazon.com or Youtube) for “rust converter“.

I personally haven’t dealt with a rusty boule using vinegar or a rust converter, so I can’t personally vouch for them. But there is a lot of convincing testimony that they work. I have used a short (6-hour) vinegar soak to blacken boules.

The moral of the story is that if you come across some rusty old boules, don’t write them off and throw them away. They can be restored to playable condition. Depending on your taste, they may even be better than they were before they got rusty.